It had been clear to us for a long time that we would like to organize an event in our secret home town Düsseldorf. We could not have guessed 12 months ago that the time would come already now! After consultation with the Environmental authoritities and the AWISTA Düsseldorf … on April 29th Ozeankind will be in Düsseldorf to pick up wild rubbish on the Rhine banks,

The Rhine in particular is a risk for all the rubbish that people forget. Although AWISTA carries out regular clean-up operations & several rubbish bins are available on the Rhine promenade, we have been able to collect quite a lot. But one thing at a time.

On the last weekend of April, the 28th and 29th it has been our 6th international Plasticrebel cleanup already taking place. We have started in November 2017 while we were on the tiny island called Koh Phayamin the Andaman Sea. Since then we have been calling every month to collect rubbish together and thus make even more noise about the worldwide plastic waste problem. At the same time we would like to raise the awareness of every reader/collector with regard to their own plastic consumption.

We were active in the Rhineland.

As I just mentioned, the Rhine is the second longest river in Germany, the most water-rich North Sea tributary and one of the busiest waterways in the world. So it was crystal clear: we will be near the Rhin on both days! On Saturday we have been in Monheim, a small city directly on the Rihne. A spot just 500 metres long. It is still and again and again quite frightening how much wild plastic waste we can find in Germany. Hard plastic particles washed up by the flood, old milk cartons from Poland (?), the odd plastic package and shoes.

We found all of this more or less directly on the shore. But even at the roadside, one does not find less: cigarette butts, bottles, candy wrappers and whole barbecue remnants. Disposable grill, meat packaging and spirit in the bottle. Again and again we look at each other in disbelief and ask WHY? It’s not so hard to take all your stuff home again. Having a barbeque outside is wonderful, everyone can and should enjoy it, but honestly – you throw your garbage in the trash can at home, in your own apartment. Not too hard.

It´s a fact: “The concentrations of microplastics in the Rhine are thus in the range of the highest concentrations of the waters investigated worldwide to date”, Patricia Holm from the Department of Environmental Sciences at the University of Basel. The Rhine, for example, transports 191 million particles every day by detour into the Atlantic, which adds up to ten tons per year. However, the values could be significantly higher, because “only” the surface was examined.

Everything that lies on the shore and, above all, remains there, becomes micro-plastic over time, ends up in the river and later in the North Sea or the Atlantic Ocean. We Germans are therefore by no means innocent of the plastic in the sea. Even if the fewest of us throw a plastic bag directly and intentionally into the river.

After a call on our Facebook page and the organizational work with the city authorities, it was time for us to meet at the Tonhalle on Sunday at 2 pm. 10 nice people came to support us, among others the first unpacked shop in Düsseldorf,the FLinse, was there – together we went to the Oberkassler Rhine side. Armed with garbage bags and grab tongs. After 2 hours we were able to collect 115.7 kg of waste.

Also here the picture is a similar one as the day before in Monheim. Abandoned barbecue areas, a lot of empty beer and alcohol bottles, whole or in shards all over the stones. Always good for dogs or children. Not. But also chip bags, handkerchiefs, plastic packaging, coffee to-go cups were collected. In the end we were all happy about sunshine and our contribution. 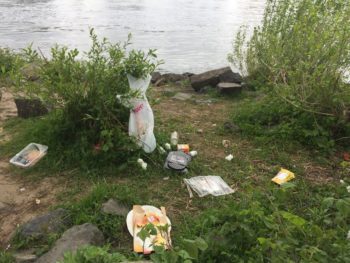 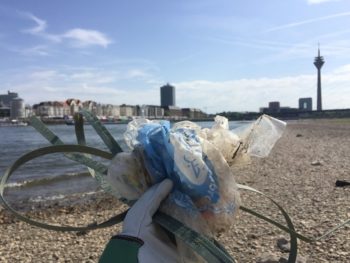 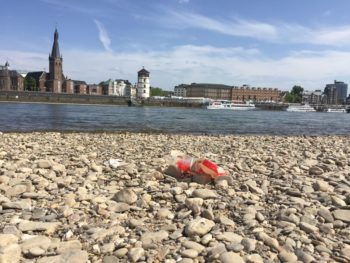 Where else did people take action?

Aber wir waren ja nicht alleine fleißig. We received pictures and news from 9 countries. Even in the beautiful South Seas people took action: impersonated by leavingcomfortzone. So Ozeankind has been simultaneously active in Bali, Portugal, Greece, France, Switzerland, the Netherlands, Austria, Switzerland and of course in different places in Germany. Together we were able to remove 763.89 kg of rubbish from nature during these two days and disposed of it in the best possible way. Once again a complete success and without all of you this would not be possible. THANKS! 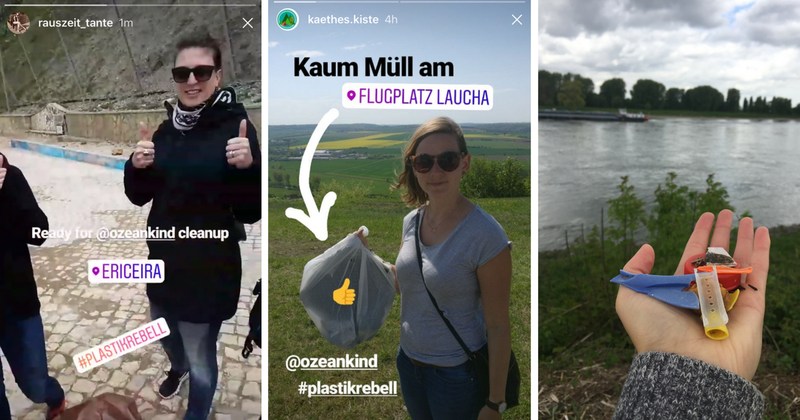 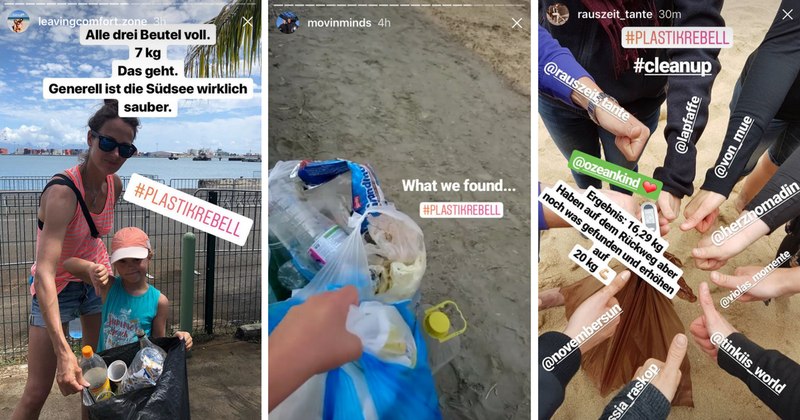 After the CleanUp is before the next one

Of course there will be a new date in May. Together with the Travel Festival we will collect garbage at the Kemnader See on Sunday with the support of blue:beach and the Surfschule Westufer. Click here to get to the Facebook event. Click and be part of it. You will find a HOWTO in the description of our event.

Picking up waste on the island of Koh Phayam