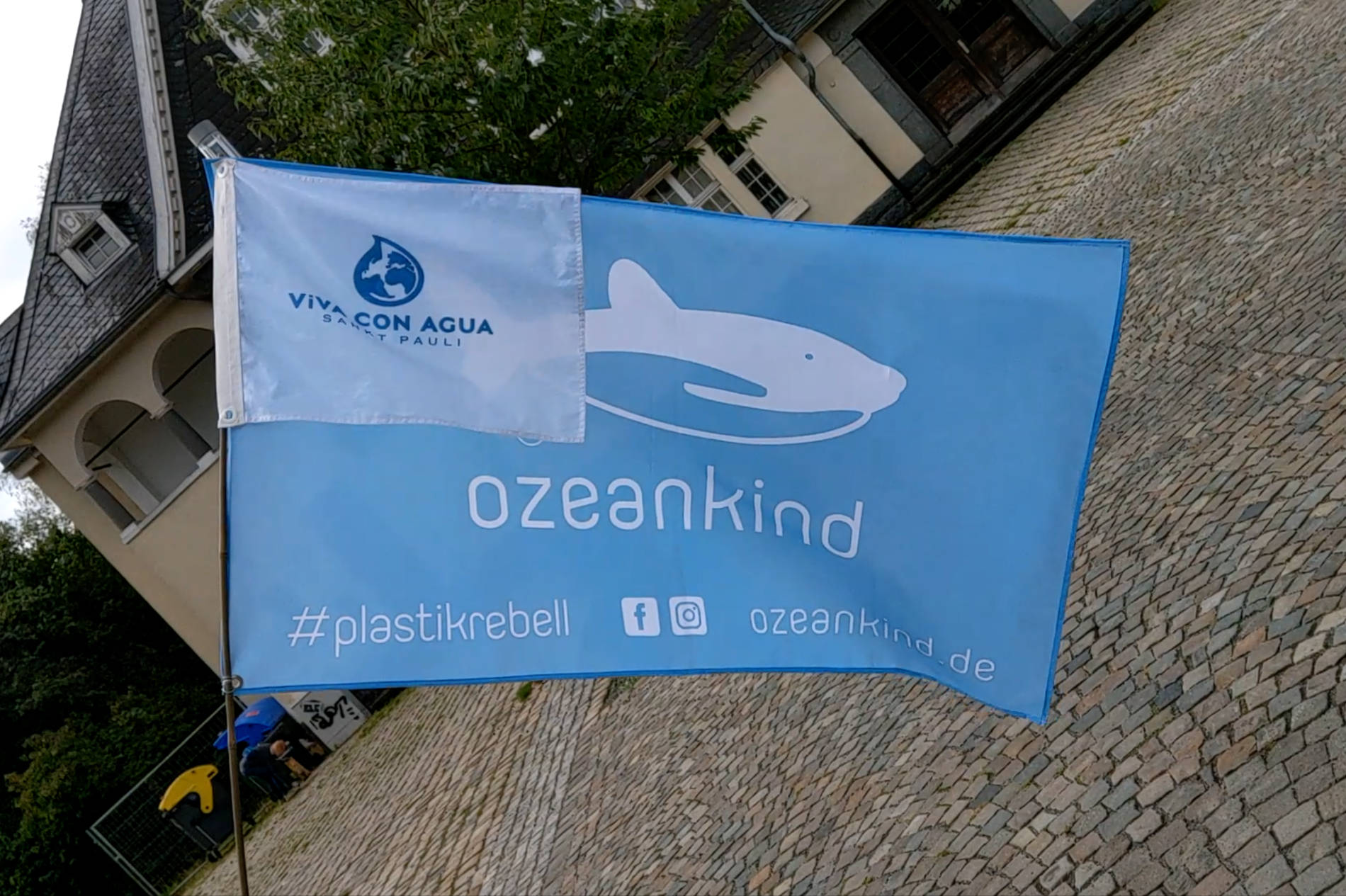 CleanUp together with Viva con Agua in Bochum

Suddenly the police came and stopped their care almost right in front of us. Their questions was what we’d be doing here. And that they wanted to google the name Ozeankind® next … maybe because the flag says something about “rebel” 🙂 Good one. But one after the other … there we are at the meeting point of the old station forecourt of Bochum-Dahlhausen, waving our flags. We? Well, we have formed a cool team this time … with the crew of Viva con Agua Ruhrpott. Even writing that is so cool!

So it is shortly after 12 o’clock – on a Sunday – and there are indeed surprisingly many people who want to join us for a CleanUp in Bochum at the river Ruhr. People who want to make a difference, who wanna set an example. Together with Viva con Agua Ruhrpott and supported by USB Bochum we have been able to organize this CleanUp. Especially when you are in Germany and if you expect a few more people for such an event, you should incorporate the city or municipality into the project and get them on board. Since after all, the waste found has to be disposed of quickly and professionally. Plus – the city provided us with garbage tongs, garbage bags, gloves and warning vests, and afterwards also took care of the disposal. Also here again a big thank you!

Sunday afternoon with a difference

Bochum-Dahlhausen seems to be a popular destination for weekend visits. You can go fishing, barbecuing, walking, jogging, cycling or explore the riverside by SUP or canoe! And it seems as if many people are following these activities. And all these people we saw, too. But they have also seen us, the almost 30 people, picking up the garbage with tongs and gloves. Completely voluntarily, without payment, apparently for fun.

Some stopped and asked us why we would do it, if we would do it again and with whom we would have organized it. Others passed by and had at least one word of praise left for our action. Others again meant things like “yes, that’s getting worse and worse with the garbage, but you can’t do much because …”.

Well… you could do something, only then you’d have to bend over and clean up other people’s garbage. 😉

The great thing is: on this day all our helpers have consciously decided to dedicate three hours of their Sunday to the environment, to bend over, to set a sign and to become active themselves. At the same time we all went for a nice walk, got some sun and fresh air. Could be worse, couldn´t it?

What did we find?

Everything. From an old hedge trimmer, a saw, two broken parasol stands to forgotten grills and some tires (2 tractor tires and 2 “smaller” tires). In addition there were several bags full of plastic waste (packaging of all kinds), empty glass bottles and cans and of course countless cigarette butts.

129 Kilo of pure waste has been picked up within 2 hours only! Then we discovered the four tyres in a small piece of woodland. Some of our strong helpers have managed to get the big tire out of the trees and rolled it to the gathering place.

“Why the heck would you dispose your old tyres next to a river?” What are those people thinking?

Such a tractor tire can be difficult to weigh with our small scale, so we asked the guys from Google about the weight of a tire. A tire of this type weighs 500 kg! Since he’s obviously been lying there for a while and lost some of his profile, we estimated the tires at 450kg each. In the end, we have cleanup more roughly 1,2 tons of waste.

As a small reminder … We’re in Germany. With a good waste system and a recycling system on top. Not in Thailand or in Africa, where there is only the garbage dump and no garbage collection.

Maybe you’ll inspire someone else to see you collect garbage?

Don’t do it for yourself, do it for others, for next generations, for a healthy environment. It´s actually fun. This is what we can promise. Just start.

A huge thank you to all of you who have helped us. From young parents with a four-week-old baby in a pram (not in the picture, of course) to a little boy with his mom and animal friend to “normal plastic rebels and Viva con Agua water drops (that´s how they call themselves)”.

Once again it was a lot of fun to cleanup waste in such a great team. Bochum … stay clean … because one day we will come back and menace with a CleanUp. Or we could accidentally come unannounced.

This cooperation with the drops of Viva con Agua Ruhrpott shows once again … if you work together, you can achieve much more!